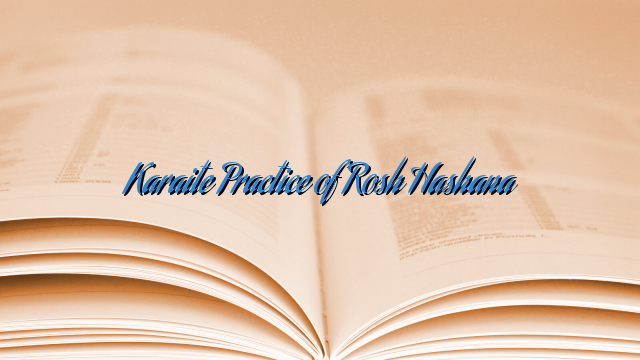 Karaite Judaism believes that the Jewish New Year starts with the 1st month.  As mentioned in the Torah, Karaite Jews celebrate this holiday only as a day of rejoicing and shouting.

The karaites believe that adopting Rosh Hashana to replace Yom Teruah is a result of a pagan Babylonian influence, which first starts with the use of Babylonian month names.  This influence is admitted in the Talmud when the jewish people was sojourned in Babylonia.  Apart from the Babylonian month names, the Jewish people had then become more susceptible to other Babylonian practices; thus led to the practice of Rosh Hashana.  In the Torah, the months are numbered as First Month, Second Month, Third Month, and so on.  See Leviticus 23; Numbers 28.

The karaites do not (allow) work on the day, except what is needed to prepare food

23 And YHWH spoke to Moshe saying: 24 Speak to the Israelite people thus: In the seventh month, on the first day of the month, you shall observe complete rest, a sacred occasion commemorated with loud blasts. 25 You shall not work at your occupations; and you shall bring an offering by fire to the YHWH.

“‘In the seventh month, on the first day of the month, you are to have a holy convocation; do not do any kind of ordinary work; it is a day of blowing the shofar for you. 2 Prepare a burnt offering to make a fragrant aroma for Adonai — one young bull, one ram and seven male lambs in their first year and without defect — 3 with their grain offering, consisting of fine flour mixed with olive oil — six quarts for the bull, four quarts for the ram, 4 and two quarts for each of the seven lambs — 5 also one male goat as a sin offering to make atonement for you. 6 This is to be in addition to the burnt offering for Rosh-Hodesh with its grain offering, the regular burnt offering with its grain offering, and their drink offerings, according to the rule for them; this will be a fragrant aroma, an offering made by fire to Adonai.

Yom Teruah Is Also Known As

Yom Teruah is also known as Zikhron Teru’ah, which means the memorial [with the] blowing [of horns].  It is also known as shabbat shabbaton (‘שַׁבַּת שַׁבָּתוֹן‎’) or penultimate Sabbath (meditative rest day).  It is holy day to God.

Karaites remind themselves of the following during this day:

These are in preparation of Yom Kippur, day of atonement.