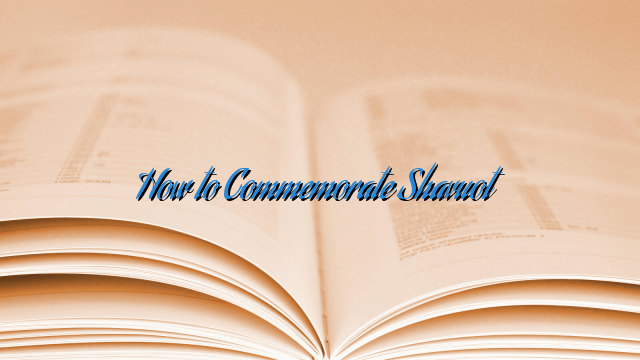 It is a major Jewish festival.  It was originally a harvest festival, but now also commemorates the giving of the Law (the Torah).  It is also known as the Feast of Weeks in English and as Pentecost.

We can celebrate Shavuot by reading and meditating on Exodus 19 and Exodus 20.

The two amazing chapters where YHWH shows His presence and power to 3 million people.

9 Adonai said to Moshe, 10 “Tell the people of Isra’el, ‘After you enter the land I am giving you and harvest its ripe crops, you are to bring a sheaf of the firstfruits of your harvest to the cohen. 11 He is to wave the sheaf before Adonai, so that you will be accepted; the cohen is to wave it on the day after the Shabbat. 12 On the day that you wave the sheaf, you are to offer a male lamb without defect, in its first year, as a burnt offering for Adonai. 13 Its grain offering is to be one gallon of fine flour mixed with olive oil, an offering made by fire to Adonai as a fragrant aroma; its drink offering is to be of wine, one quart. 14 You are not to eat bread, dried grain or fresh grain until the day you bring the offering for your God; this is a permanent regulation through all your generations, no matter where you live.

15 “‘From the day after the day of rest — that is, from the day you bring the sheaf for waving — you are to count seven full weeks, 16 until the day after the seventh week; you are to count fifty days; and then you are to present a new grain offering to Adonai. 17 You must bring bread from your homes for waving — two loaves made with one gallon of fine flour, baked with leaven — as firstfruits for Adonai. 18 Along with the bread, present seven lambs without defect one year old, one young bull and two rams; these will be a burnt offering for Adonai, with their grain and drink offerings, an offering made by fire as a fragrant aroma for Adonai. 19 Offer one male goat as a sin offering and two male lambs one year old as a sacrifice of peace offerings. 20 The cohen will wave them with the bread of the firstfruits as a wave offering before Adonai, with the two lambs; these will be holy for Adonai for the cohen. 21 On the same day, you are to call a holy convocation; do not do any kind of ordinary work; this is a permanent regulation through all your generations, no matter where you live.

22 “‘When you harvest the ripe crops produced in your land, don’t harvest all the way to the corners of your field, and don’t gather the ears of grain left by the harvesters; leave them for the poor and the foreigner; I am Adonai your God.’”